So you are a developer?

Subscribe to my newsletter and never miss my upcoming articles

So you are a developer. So what language(s) do you use?

Well, it turns out that I am a developer. Why? Well because I develop stuff is why! so what buddy, who cares? Well I do for one, but I don't mind if nobody else cares, I love it. I can express my creativity, exercise my mind, and build stuff from nothing. That's right, buddy, from nothing. It's like baking a cake, and hey, I do that too, gather ingredients, stirring things up, measuring quantities, testing bits and pieces, tasting, add in pressure and heat. But I am hardly a GOD genius; sure I am just a pretty ordinary guy.

I follow the Twitter universe a bit, and well developers are always chatting about languages, how they got started, learning everything, and getting a job. So I decided to write this little piece. So I am a developer and then what languages do I use?

Github It turns out Github has a very nice feature which actually shows an analysis of the languages used in a given repository. I took a couple of screenshots and added them here for you to look at my brilliance! 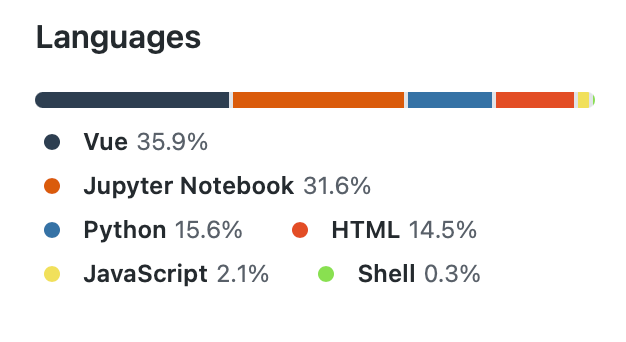 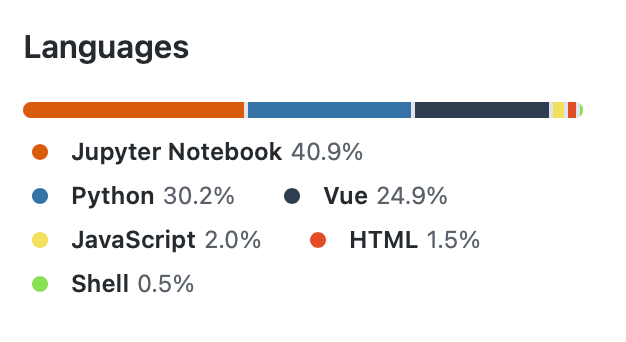 It turns out I am a bit of Jupyter Notebook fan 30-50% of my repositories contain Jupyter Notebook Language. Naturally, Jupyter Notebook isn't a language, and in my case, we talk about Python. So I really use Python a lot, and that is true. Backend and Microservices stuff - you know!

Next, I use a lot of JavaScript, and that is all Node and Vue.js, HTML, and you know that is front end UI stuff right!

Not such a big shell fan but I think Github refer to bash scripts. I do use bash scripts when I define services in Linux using Systemd. But that is generally just running my jobs.

Probably at this point you are saying to yourself, or will soon, what to hell is the point of this article anyway. This is an article for me; you can share it if you wish since I wanted to do something on my new Mac Mini M1 to really see how it is. Guess what? It is really nice to write with! Are you surprised? Apple computers have always been nice to work with. I did have an Intel-based MacBook for a while, and I was not too fond of it. It just didn't seem powerful enough.

Well folks, if you don't already bounce, let me tell you this new Mac Mini, with that M1 chip, is freaky gorgeous. Very responsive, crisp interactions, clean graphics, the colours are so vivid. Hell yeah, bring it on dude!